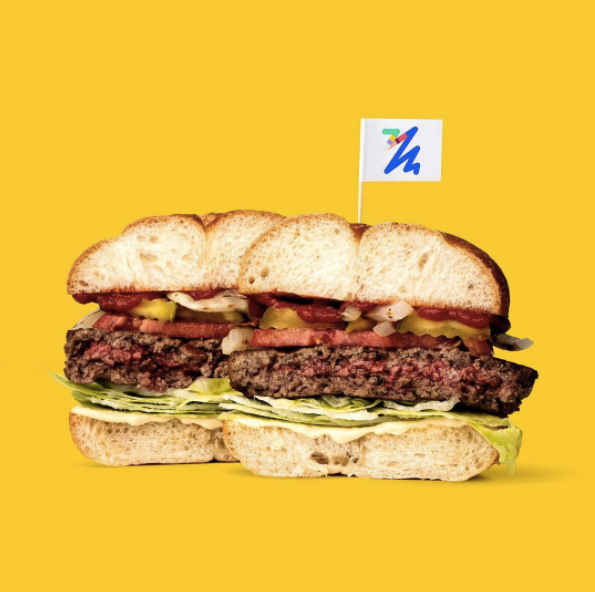 The Impossible Burger: A Delicious Meatless Burger Made In Silicon Valley?

Silicon Valley isn’t just home to tech startups, it’s home to a well funded burger startup as well.  When I hear about a plant based burger that claims to be just as good as a good ‘ol fashioned juicy, meaty burger I tend to toss it in the “yeah sure thing, not a chance” pile.  However, the Impossible Burger may just be about as close to the real thing as a plant based burger can get.

Impossible Foods is a company that has spent the past five years perfecting their burger.  They aren’t stopping there.  The company is replicating other meat (chicken, fish, and pork too!), cheese and even yogurt using plant based ingredients that will hopefully one day put a dent in our addiction to meat and dairy along with the environmental consequences that go with it.  With nearly $200 million raised from the likes of Bill Gates and Google Ventures, they’ll have the resources to expand beyond the initial Impossible Burger.  An exciting company to watch for sure.

So what’s in the burger?  What’s the secret sauce to getting this thing to taste, feel, smell and bleed like a burger?  Directly from their website:

“Our burger is made from simple, all-natural ingredients such as wheat, coconut oil, and potatoes. What makes the Impossible Burger unlike all others is an ingredient called heme. Heme is a basic building block of life on Earth, including plants, but it’s uniquely abundant in meat. We discovered that heme is what makes meat smell, sizzle, bleed, and taste gloriously meaty. Consider it the “magic ingredient” that makes our burger a carnivore’s dream.”

How does it taste?  That I can’t tell you since it’s only available in a few restaurants in CA, NY and Las Vegas, but there are quite a few reviews out there.  Here’s a summary of a couple:

Revelist.com:  with all the fixings, cheese, and bun the burger passes for animal meat.  Take away the cheese and there is a slight wheat after taste.  Eat the patty alone and there is a slight seaweed taste.  They felt that the thinner patty made it a good burger, but if it had been thicker it would have been a bit more un-burger like.  It seared well giving it a nice crust like a meat burger would.  Given the environmental benefit and overall good experience, the reviewer would choose the Impossible Burger 8/10 times.

SeriousEats.com: A big step up from previous versions, but still a ways to go.  Echoing Revelist, the reviewer says it has issues when eating sans burger bun and toppings.  Better results when cooked medium-rare.  Cooking to recommended temp created a dry burger reminiscent of past faux burgers.  Overall very impressed.

Reading through a few other reviews and you’ll generally find that they are mixed when compared to a real burger.  However, considering the environmental benefit, and the fact that it gets close to a real burger with the aid of cheese and a few fixings, it’s an exciting product.  In another 20-30 years meat may not be an option for many due to the high cost to produce and many more will make the conscious decision to choose food that doesn’t require such an environmental hit.   I personally look forward to trying it soon.  The company has plans to start selling it in grocery stores and online as well.